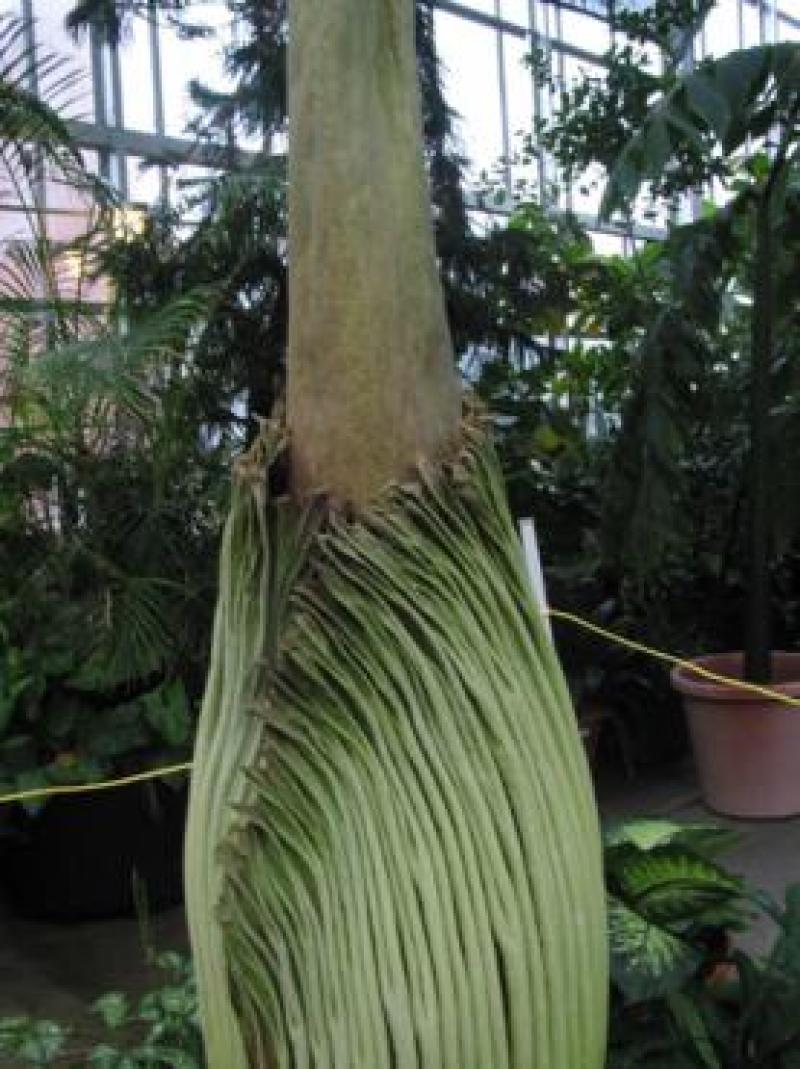 Just after 4pm we noticed the fringe on the top of the spathe began to pull away from the spadix. 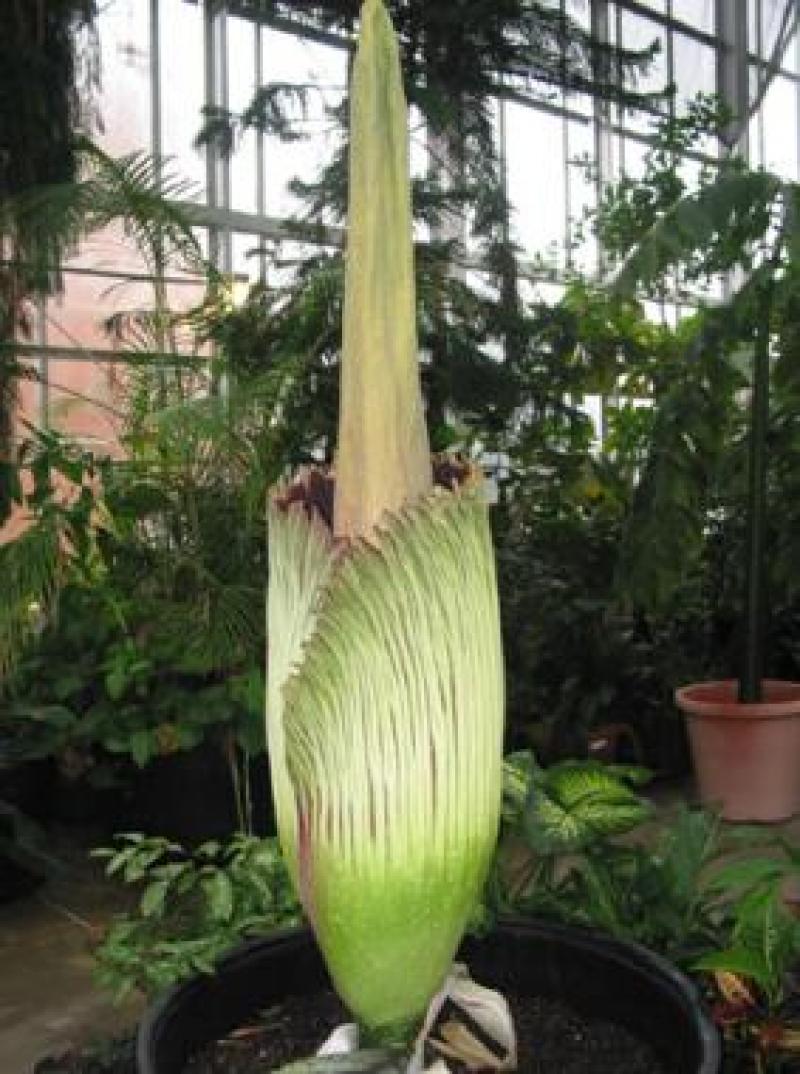 By 5 pm the spathe skirt had opened a few inches. Just a faint smell at this point. We measured the temperature of the plant at the peduncle (stem base), at the spathe (skirt) and at the spadix (spike). There was only a 1-2 degree difference. Right around 20C. 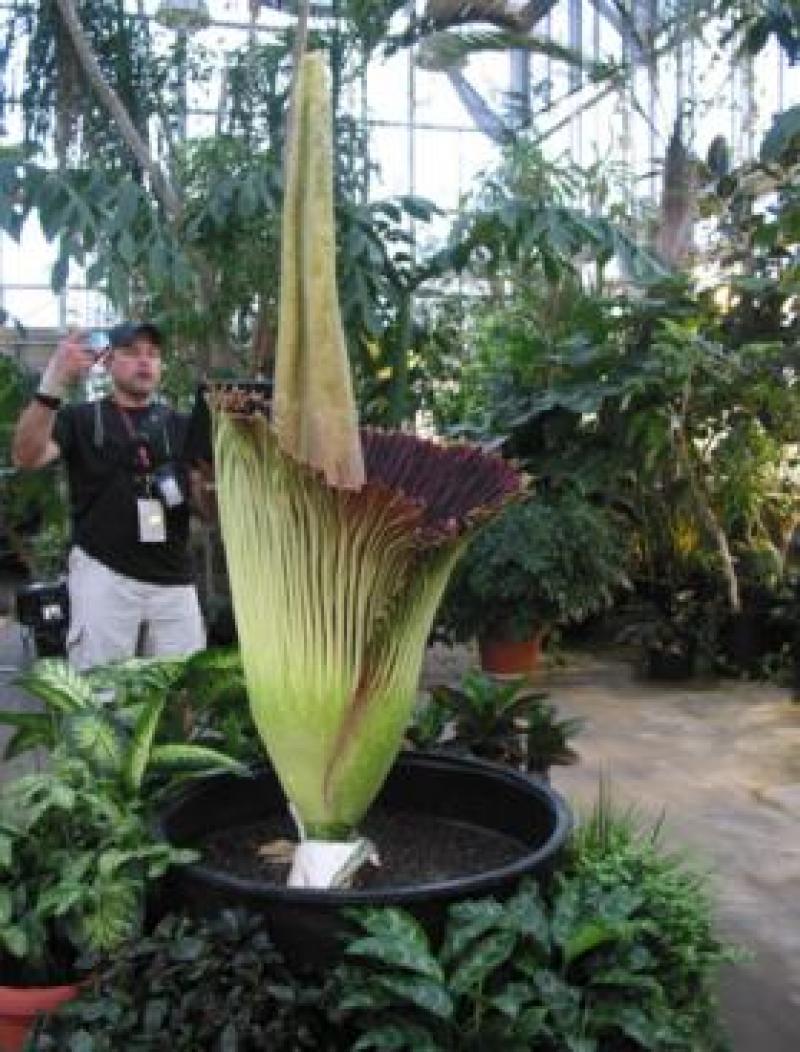 By 7pm the spathe was really filling out. The odor was definitely building but not yet overwhelming. We began to see a significant temperature differential. The peduncle and outside of the spathe were around 21C and the spadix was 25C near the tip. 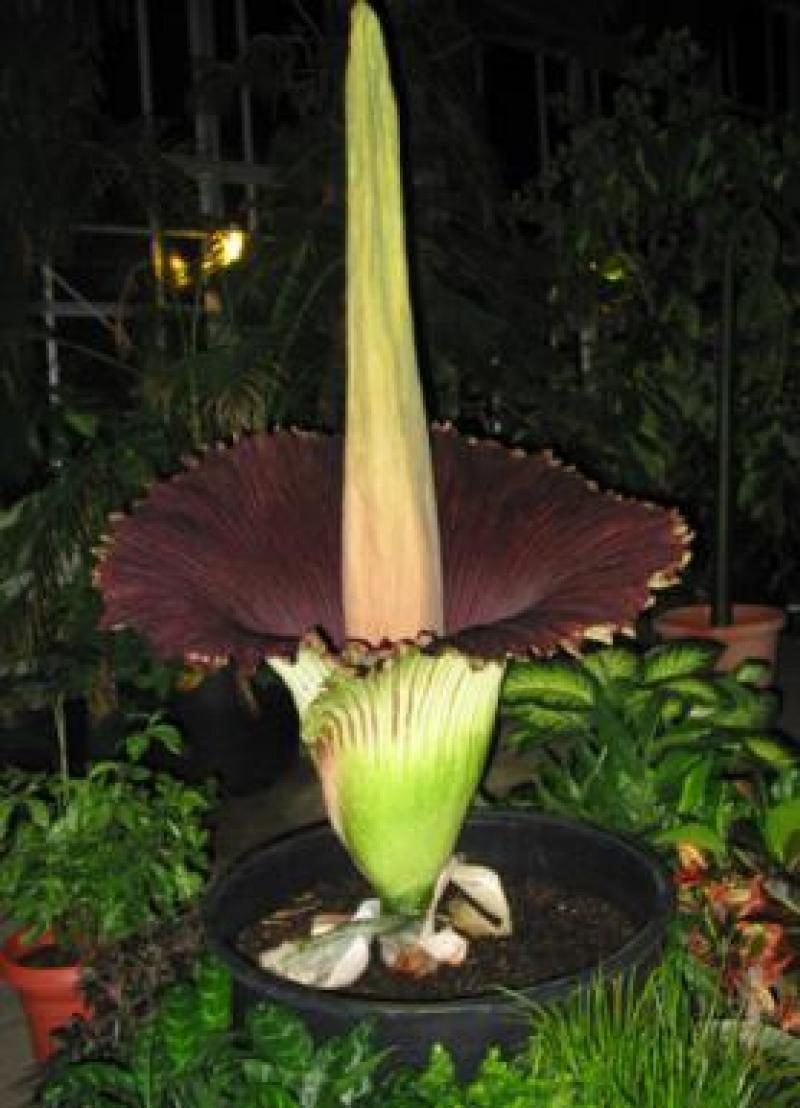 Woody was almost completely open by 9pm. The smell was intense. We could detect it down the hall and into the building--about 125 feet away! The spathe was already 33" across--it was 44" the next morning! We took the last temperature measurement close to 11pm and the differential was amazing. The peduncle and outer spathe were 22C and the tip of the spadix was 35C=95F. You could feel the heat radiating from the plant. The heat helps the odor to carry far distances. 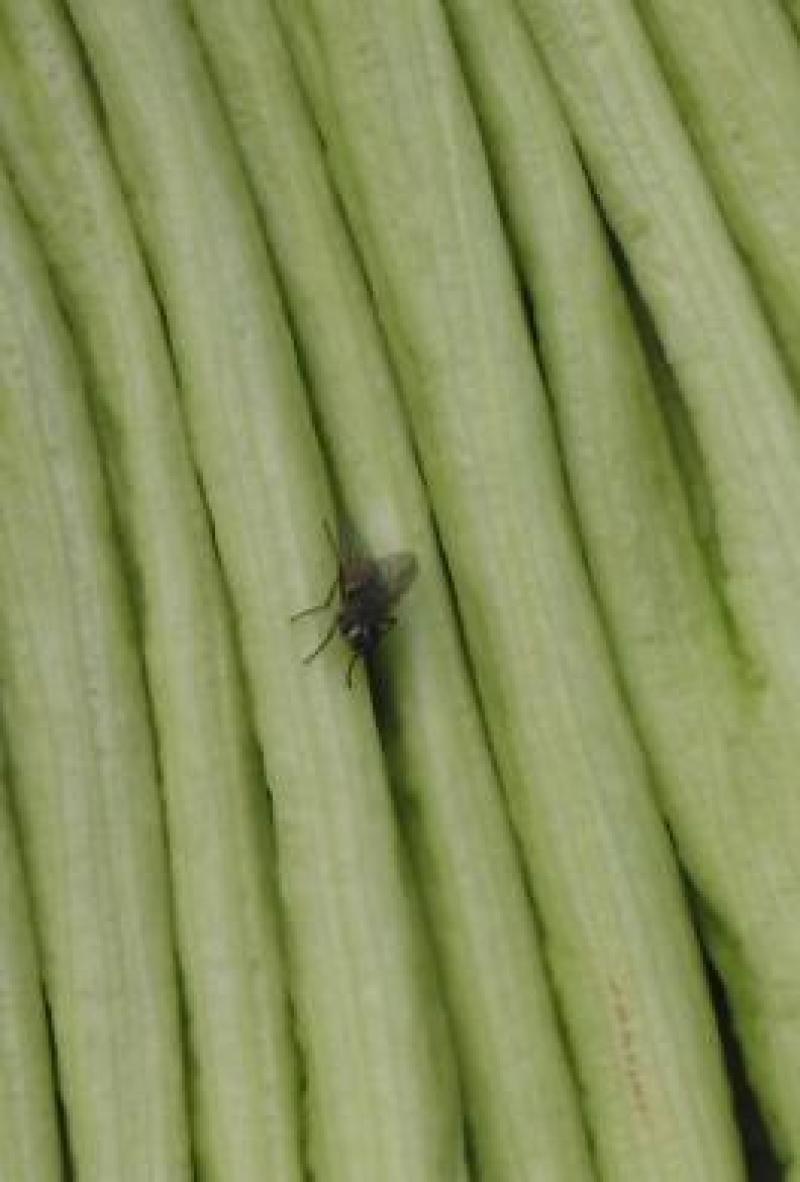 Hmm...maybe this fly knows something we don't. We are revising our bloom ETA to within the next few days. We are monitoring it closely--just as this fly is.

The Greenhouse is Closed Today. 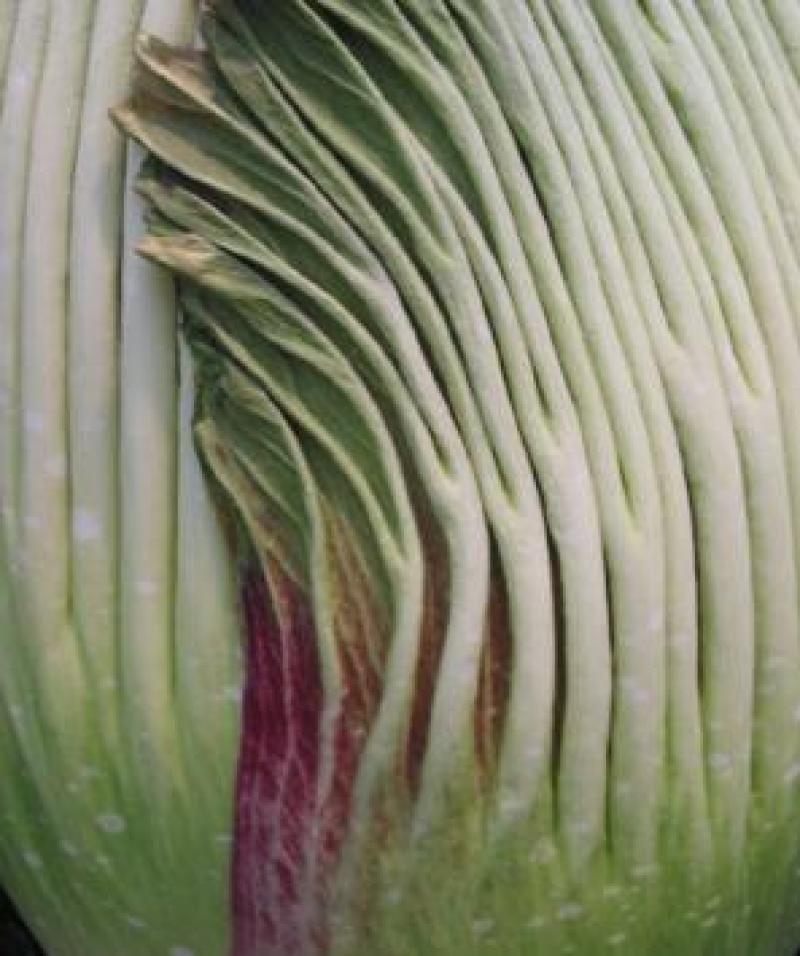 Here is a nice close-up of the spathe at the overlap. The maroon color is filling in some. We will start to see more of this coloring and the pleats expanding as we approach bloom. 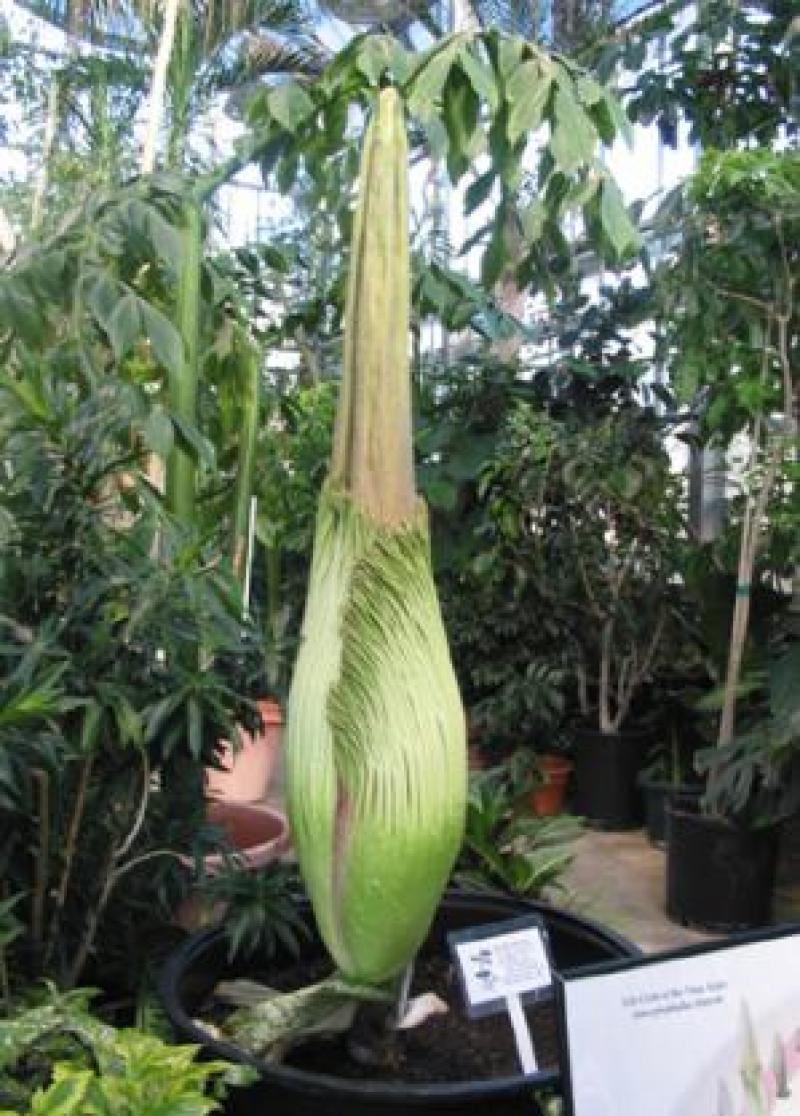 Almost 2" since yesterday, so we still have some nice growth. We are noticing more of the maroon coloring coming in on the spathe (the frilly outer skirt) and the pleats of the spathe are becoming deeper. The peduncle (the stem part below the flower has elongated as well.

Today's Question: Does it smell yet? Nope, not yet. It will begin to smell slightly the day before opening and be at it's most odiferous the first evening of bloom. 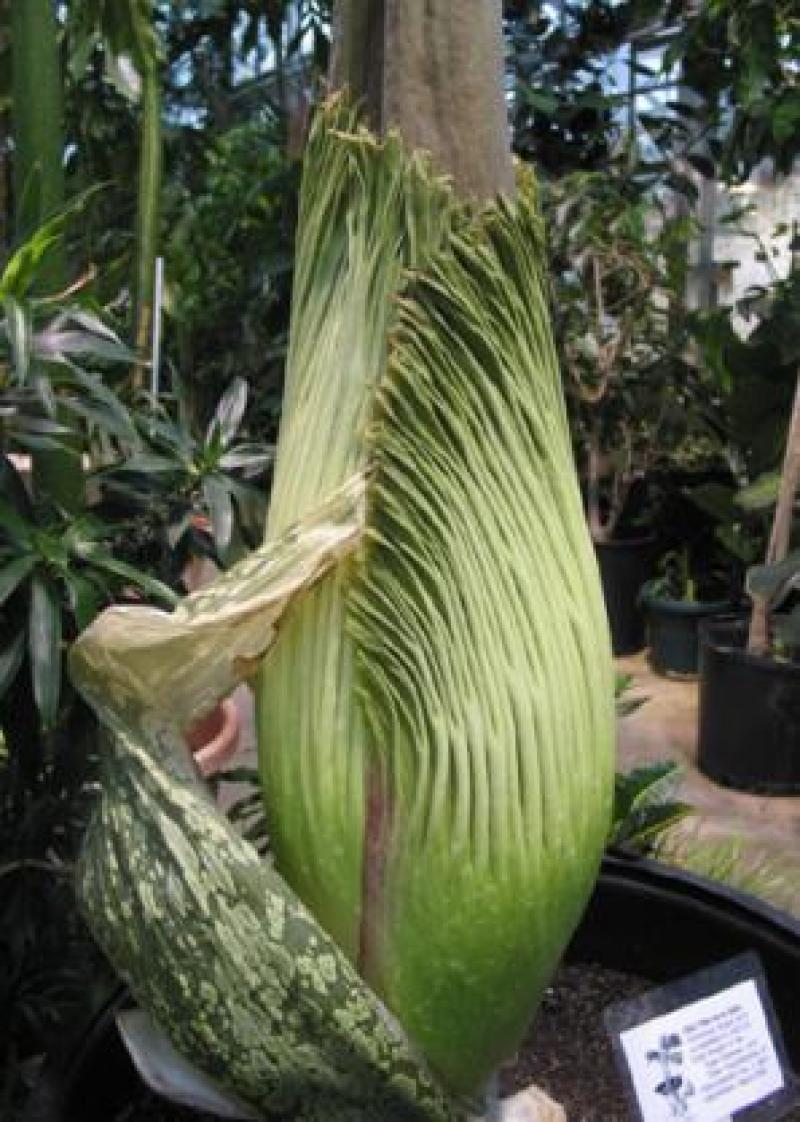 The last cataphyll is falling away and now we can see the overlap of the spathe. Woody is slowing down a bit in growth but we've had little sunshine here. Our #1 question: When will it open? We don't exactly know but we are looking for the following signs: 2-3 days of slower growth and a secretion from the spathe at the overlap. 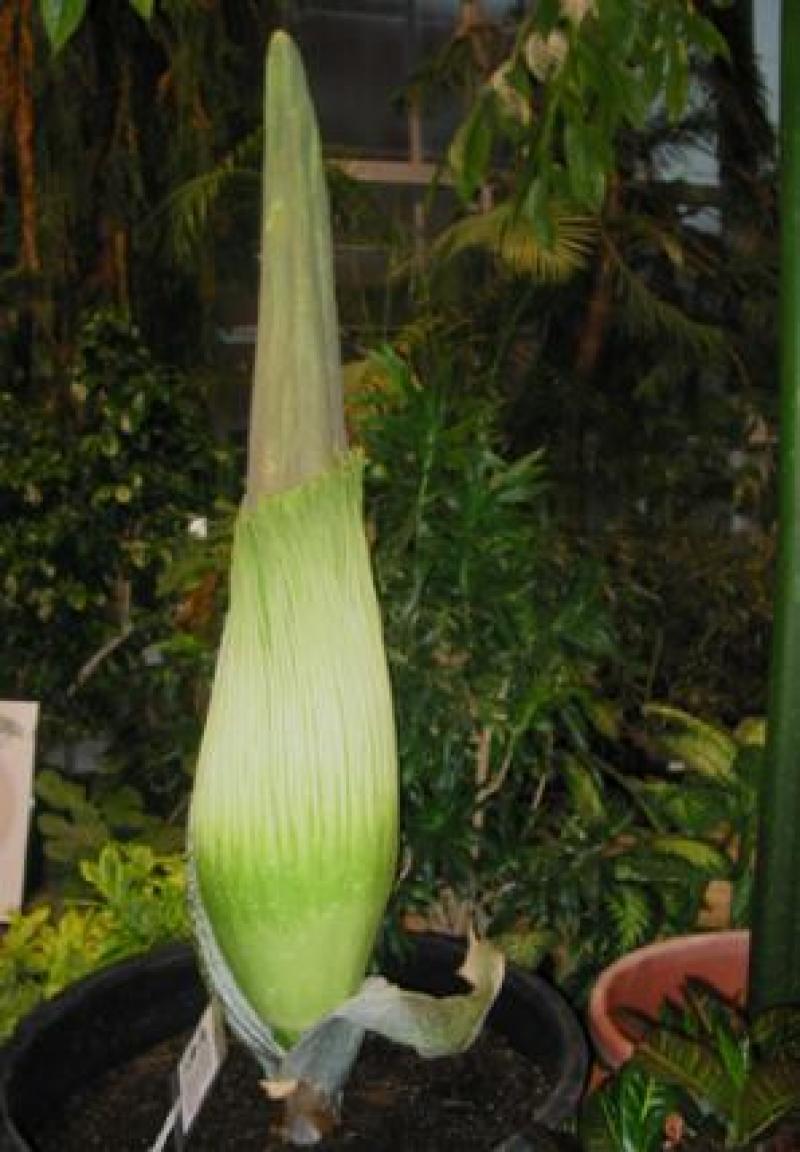 Only one cataphyll (outer protective leaf) remains. As you can see in the image, the cataphyll on the back side has fallen and begun to wither. Woody gained another 3.5" since yesterday taking him over 5 feet today. We got a glimpse inside the ruffled edge of the spathe (skirt-like petal) and see the blush of maroon coming on inside.

Not open for visitors today due to scheduled classes and events. 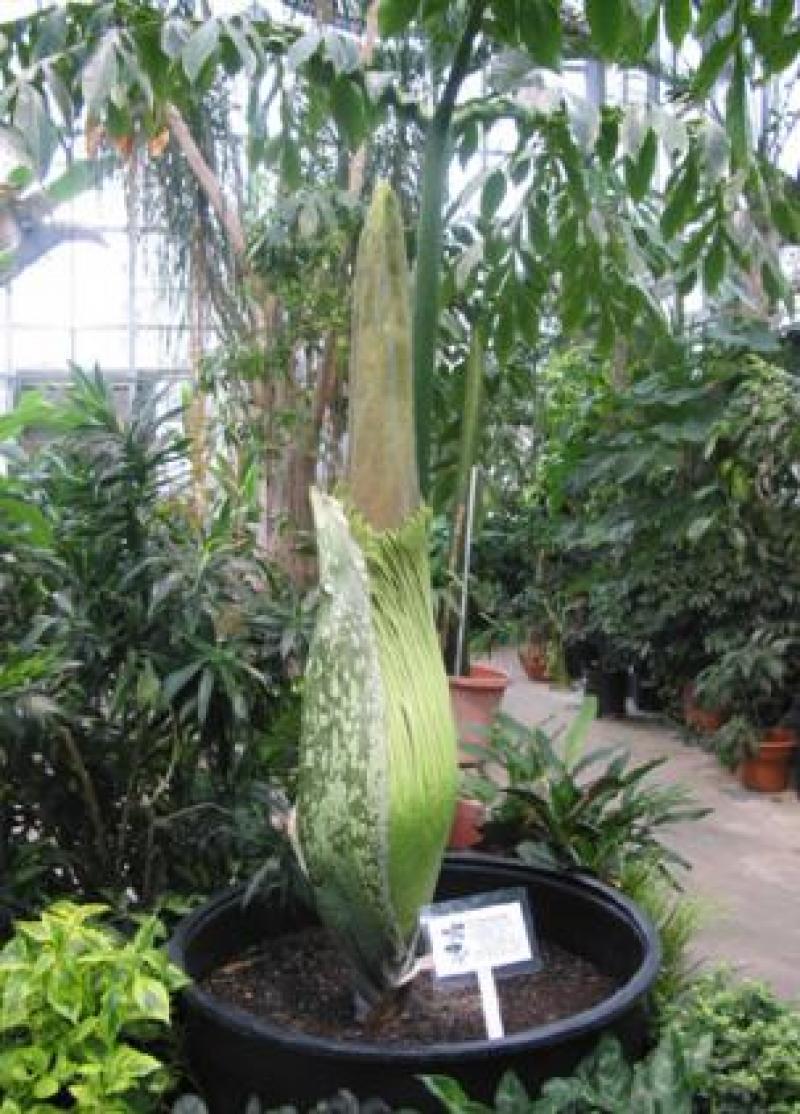 Another 3.5" of growth today and the spadix is coloring up nicely. Can see the peduncle (the "stem" part at the base of the bloom) getting longer as well. No change in the circumference probably due to the withering of the cataphylls (outer protective leaves. These will wither and die back by the time the bloom opens. 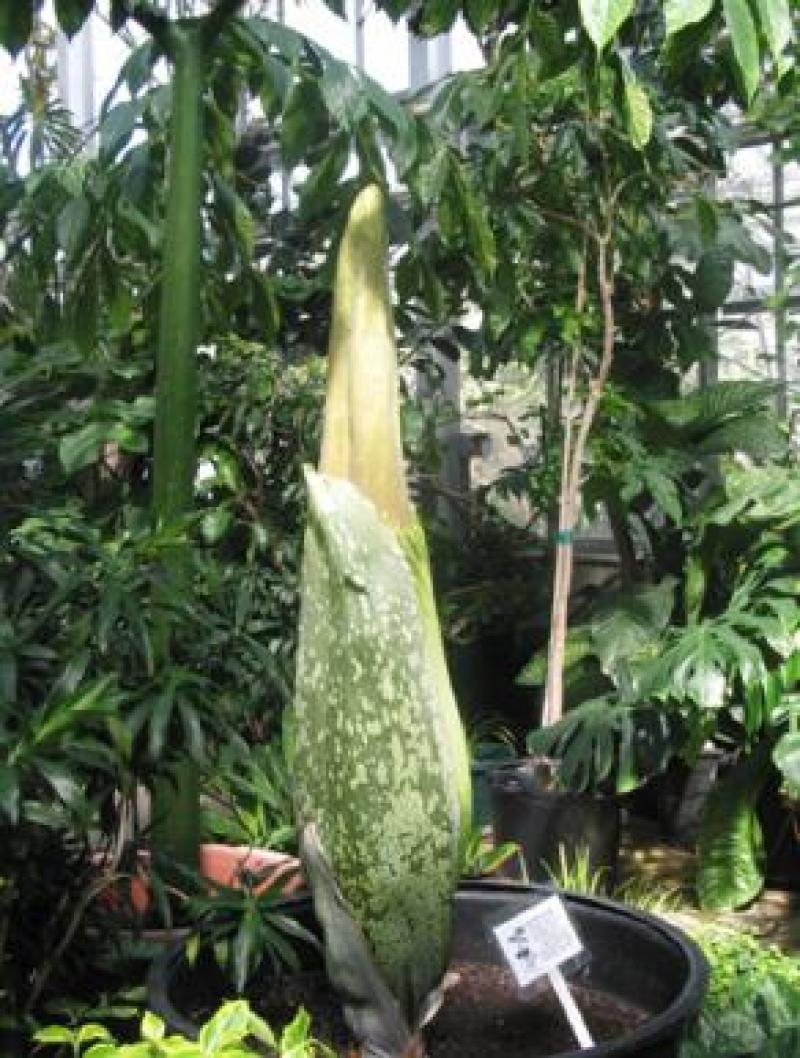 Four more inches today--must have been all those clouds yesterday keeping the sun away that slowed Woody down a bit. Still, 4 inches in one day is respectable! Can see hints burgundy coloring up the inside tips of the spathe (the outer skirt like petal) and the spadix (tall central spike) has a bit more purplish hue than yesterday. 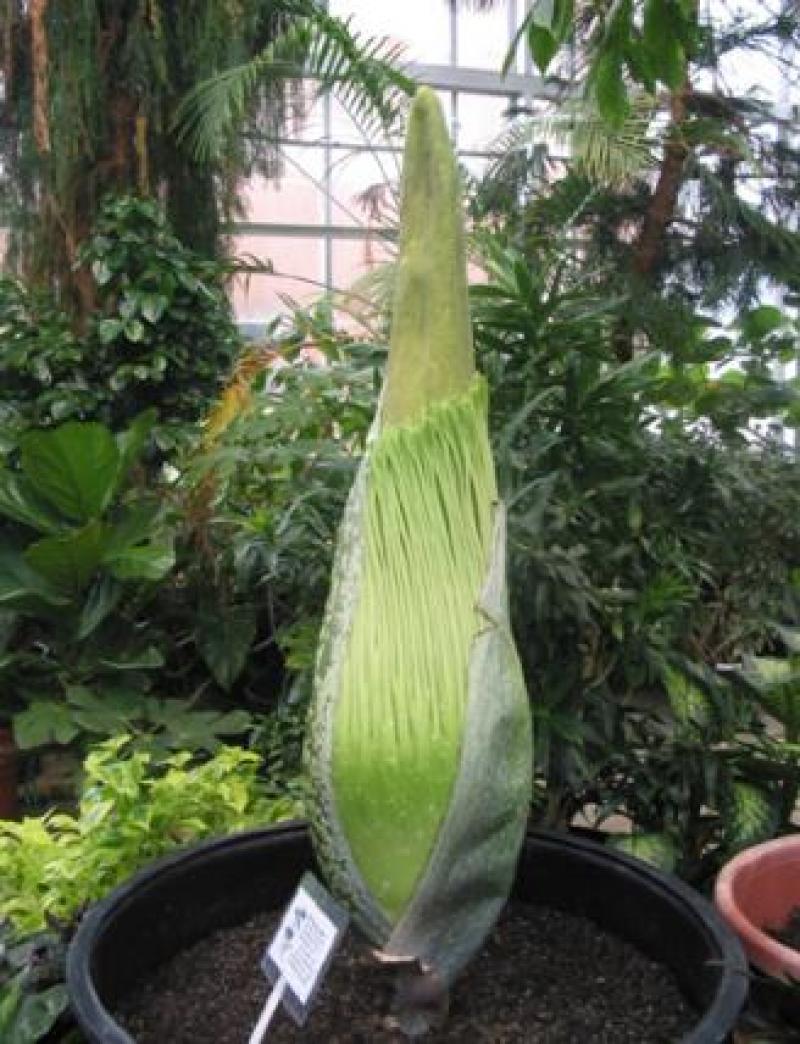 Wow! 5.5 inches since yesterday--that is some quick growing! I've never seen anything quite like this. Woody has grown outside the webcam window (we will adjust that on Monday). The spadix has elongated and I see hints of purpling.

Well, now our webcam visitors can finally get a good look at the bloom emerging. Free of the outer protective leaves, called cataphylls, Woody put on 4.25" in the past 24 hours. We are expecting a bloom in the 6-8' range. 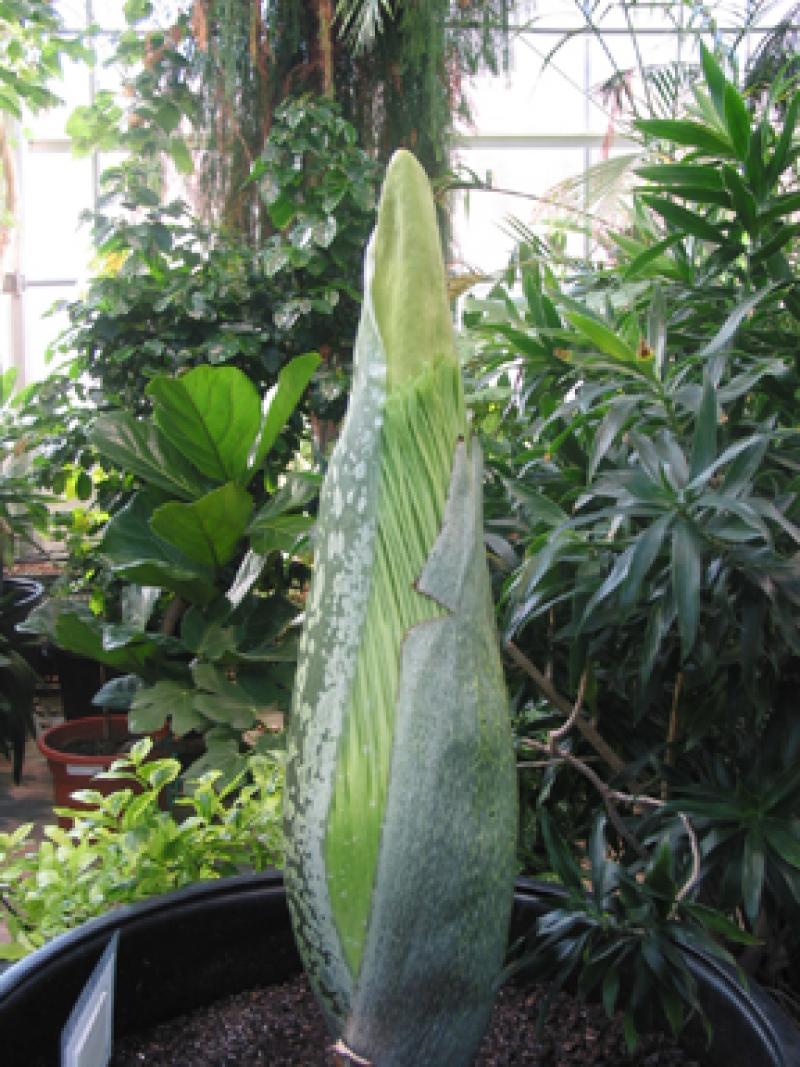 The outer protective leaves are being pulled open by the plump center. Woody put on almost 4" in girth since yesterday. Still being a bit camera shy for the webcam but soon viewers should be able to see the spathe (the frilly outer skirt) and spadix (the tall central spike) emerge out.

Finally our suspicions are confirmed! The protective sheaths have given way for a peek inside to reveal the spadix and the frilled edges of the spathe. We have named our plant "Woody" for the legedary OSU football coach Woody Hayes--himself a rare breed! Woody seems to be camera shy as the split is on the back side away from the webcam.

The bud has not grown much in height--only 1.75" today but boy has it put on some inches around the middle-we measured the girth at 24". We tried to peek inside the protective sheaths but no luck as they are still too tight to easily pull away for a glimpse inside. They have made stress splits from the rapid growth. We will just have to be patient to confirm the bloom.

A couple days ago we started to suspect the bud on the Titan Arum was going to be a flower. We are amazed at how fast it is growing--about 2" each day. Still to early to tell if it will be a flower but we have our fingers crossed.