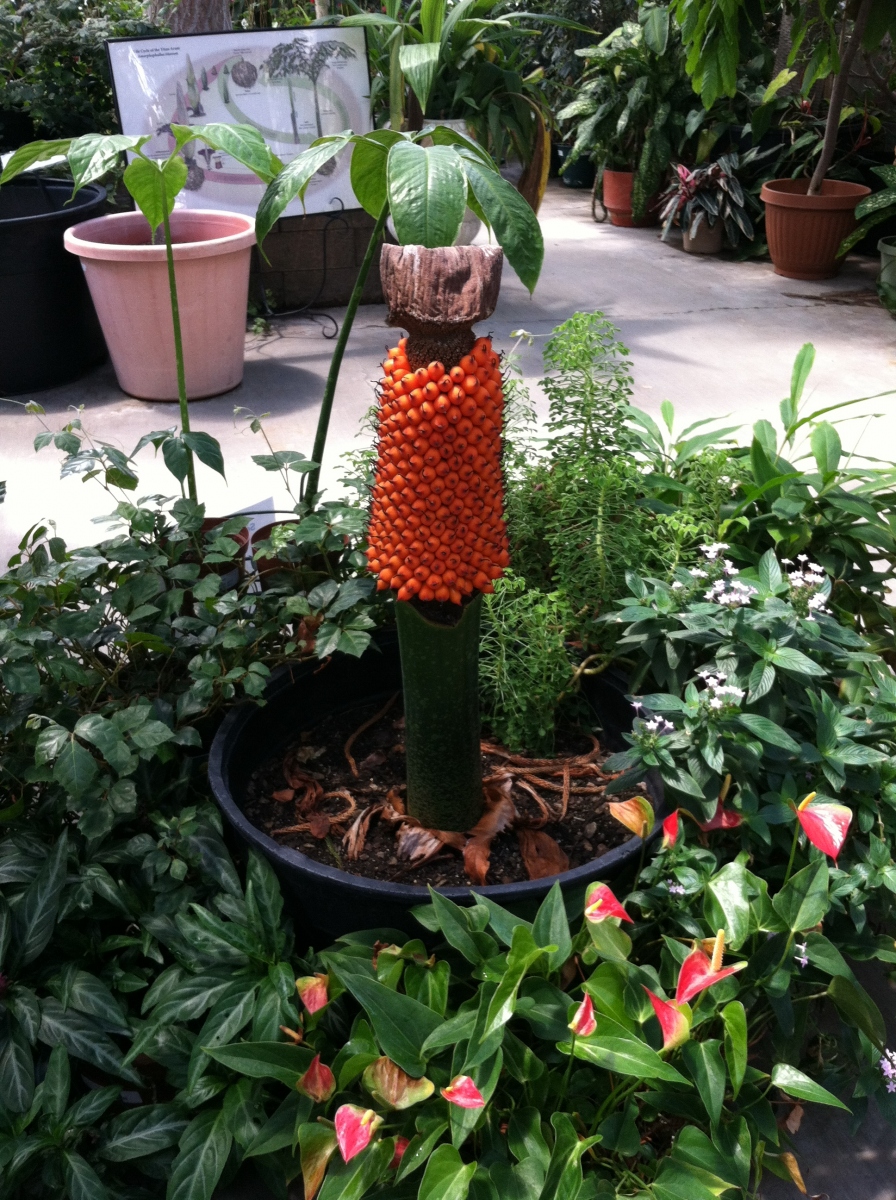 Our pollination of Maudine with fresh pollen from the Woody specimen was successful! The fruits are forming nicely and should be ripe in December or January. Each fruit will have 1-3 seeds. The fruits are not edible by humans but are a food source for hornbills in their native habitat. 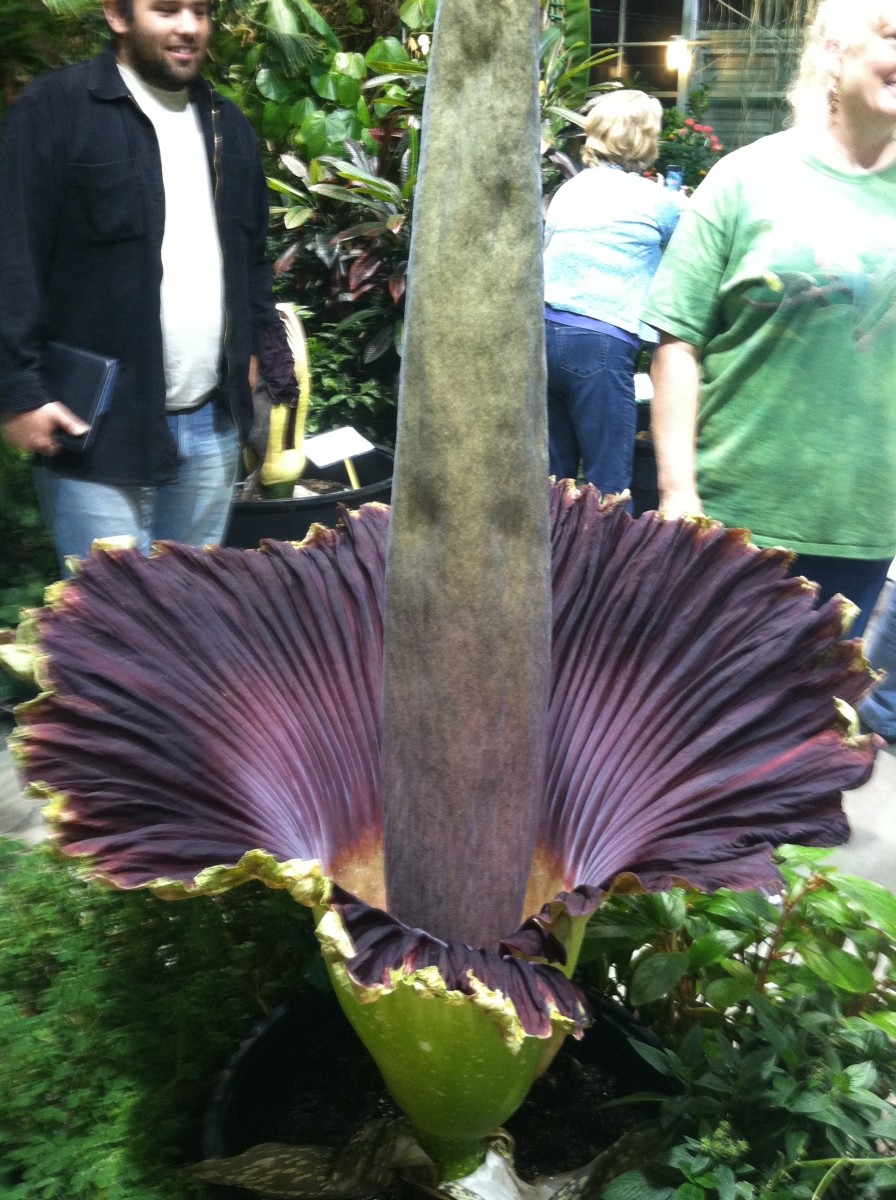 Maudine is a tuber division of Jesse who bloomed in May 2012. Jesse was grown frrom seed here at the OSU Biological Sciences Greenhouse. The seed was obtained in 2001 from the University of Wisconsin-Madison. Jesse's tuber had mutliple crowns and these were divided off a few years ago making four of our specimens genetically identical. Jesse was the largest of these tuber divisions. One of the smaller divisions was donated to Miami University over the winter of 2013 and that specimen bloomed on April 9, 2013.

Maudine's tuber weighs 25 pounds, half the size of the Woody specimen that just bloomed here at OSU. As such, we are expecting a shorter inflorescence - probably between 4-5' tall. She will still be just as stinky though! We collected pollen from the bloom of Woody last week and will be pollinating Maudine when she blooms so we can contribute to the conservation efforts of this species. Seeds from Jesse were distributed to dozens of conservatories and educational institutions across the US and abroad.

In following the tradition of naming our blooms after OSU legends, Maudine is named for the 1926 OSU Homecoming Queen, Maudine Ormsby. After a incident of ballot box stuffing in the Homecoming Queen election, the winner stepped down and the second place runner up was awarded the crown. As it happened, this was a nominee set forth by some Ag students and Maudine was actually a cow! Awarding the name Maudine to our bloom celebrates the humble beginnings of OSU as a land-grant institution. 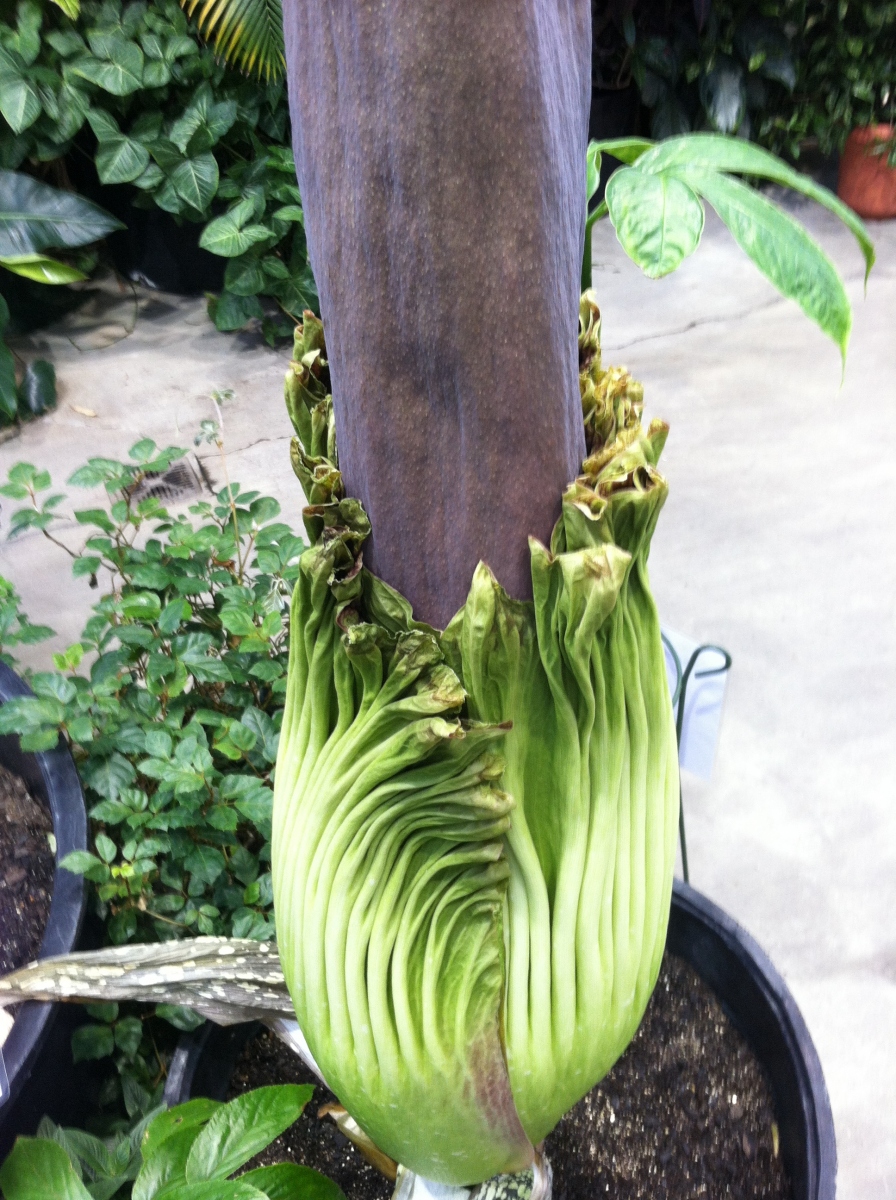 Maudine's bud is 53.75" tall. The outer protective leaves fell yesterday and she is beginning to color up around the edges. She is getting close to bloom in the next few days! 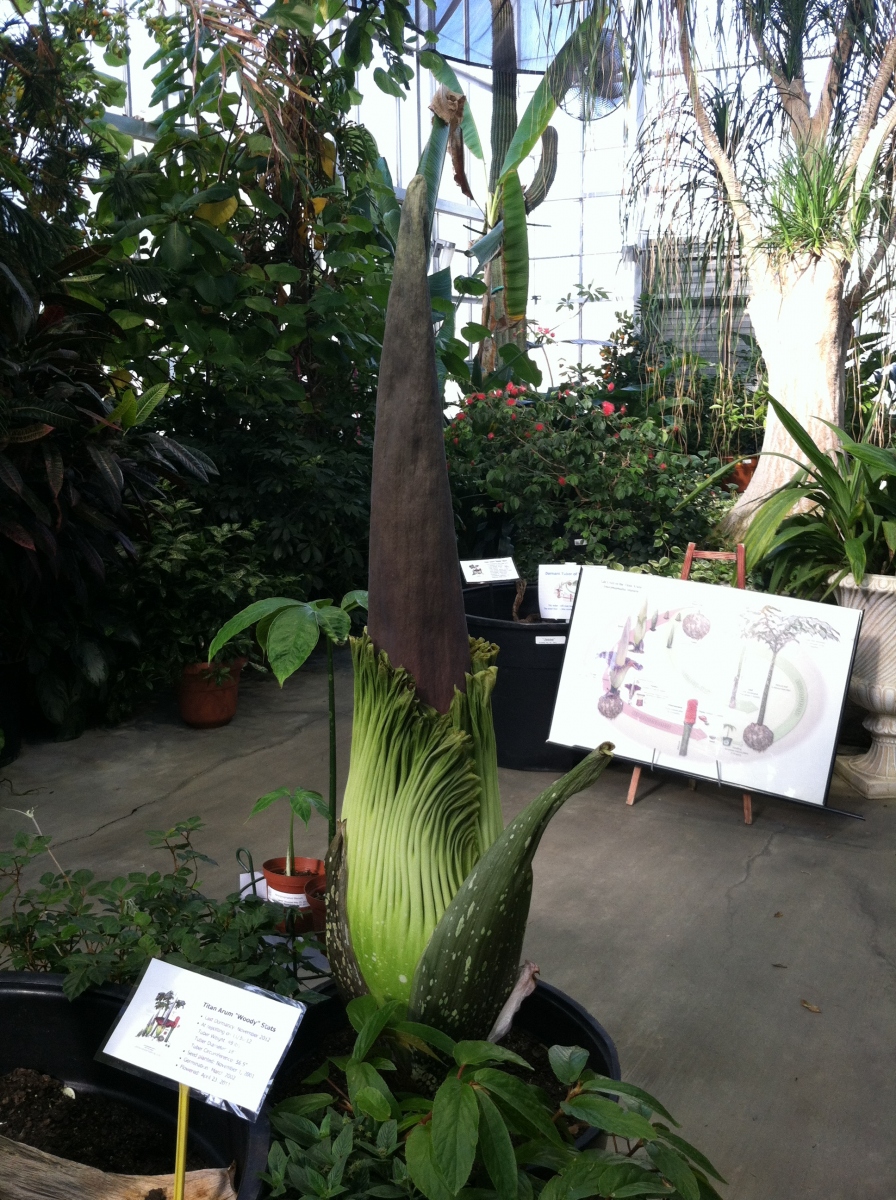 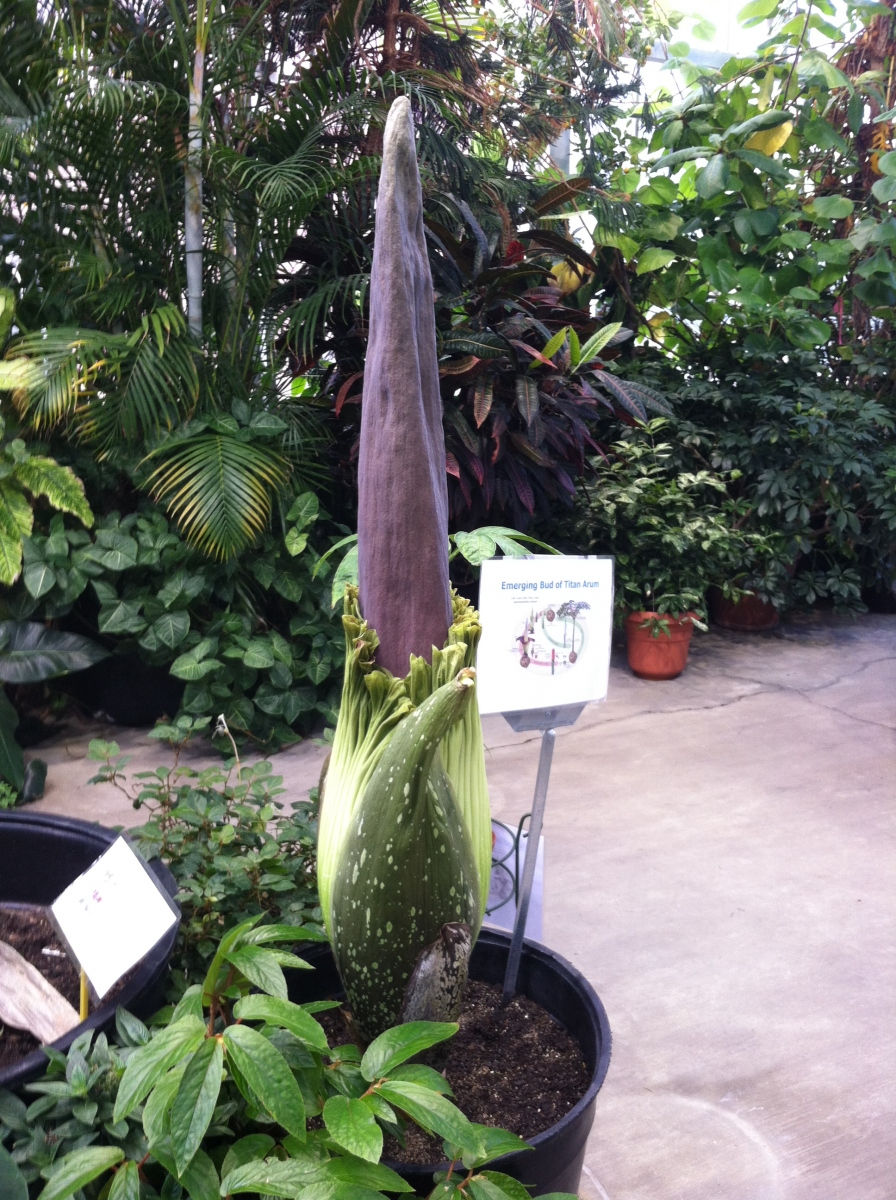 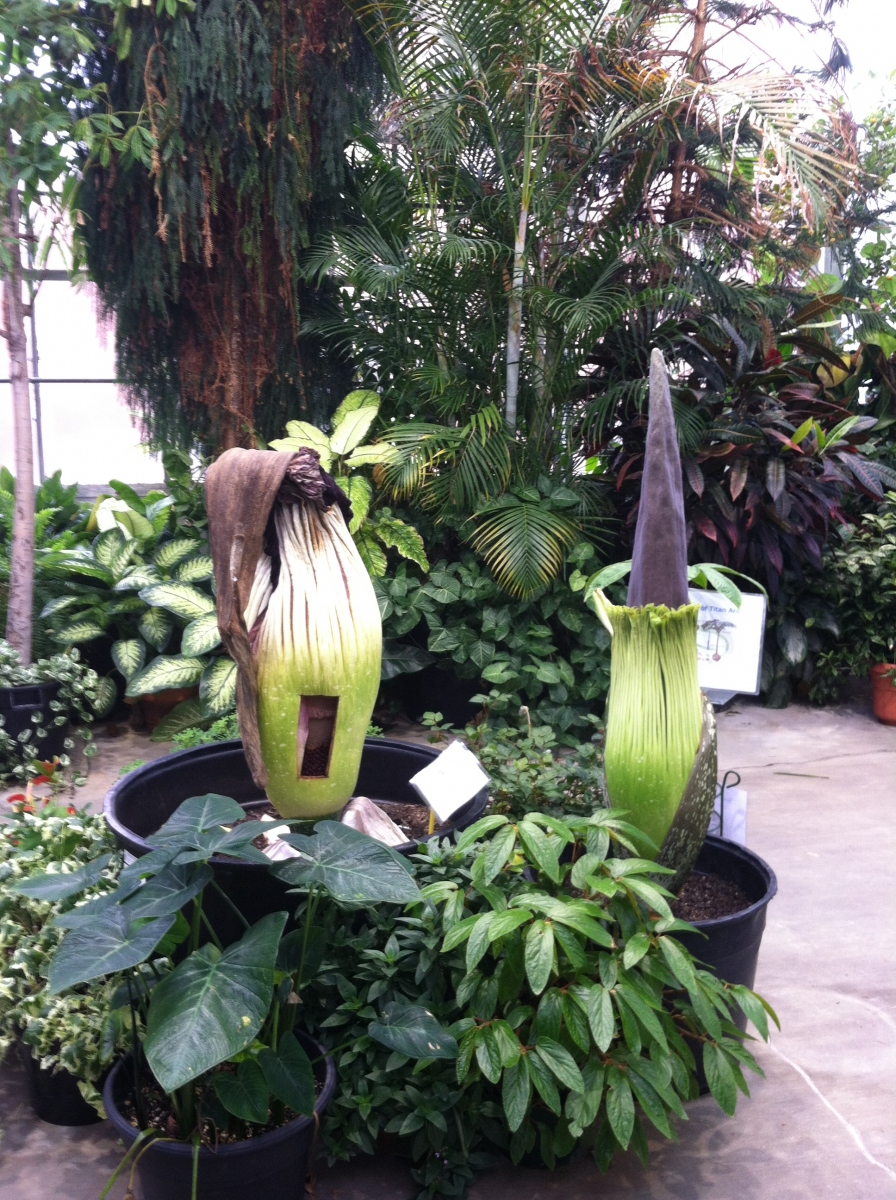