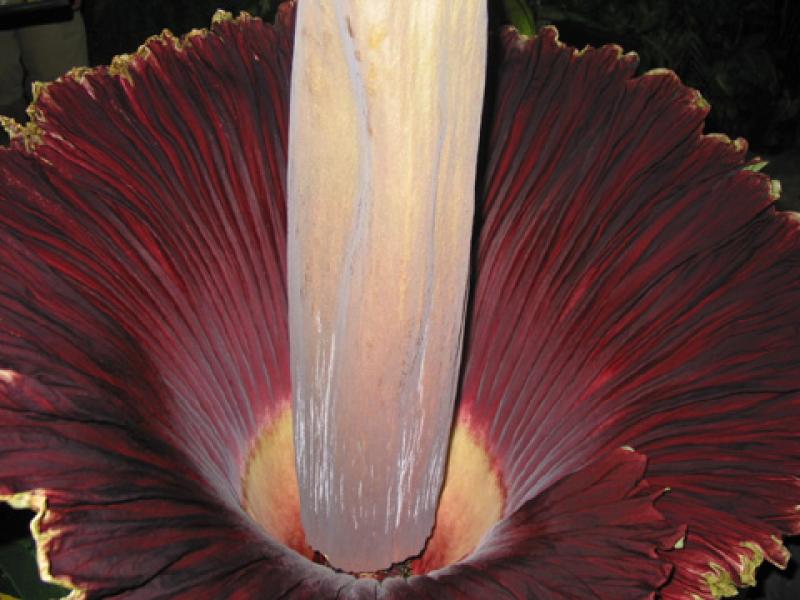 For many more photos of the bloom and the pollination of Jesse, visit the OSU Titan Arum Woody Facebook page (link on the right).

How Hot Does it Get?

The tall spadix in the center of the bloom heats up on the first night of bloom in order to disseminate the foul odor of a rotting corpse. With many thanks to the OSU Office of Energy and Environment, we used their thermographic camera to get infrared photos showing just how hot the spadix registers. The hand of one of our students provides a reference point as the human body is 98.6F. The window of heat at the base of the bloom was where we cut an access window for pollination. 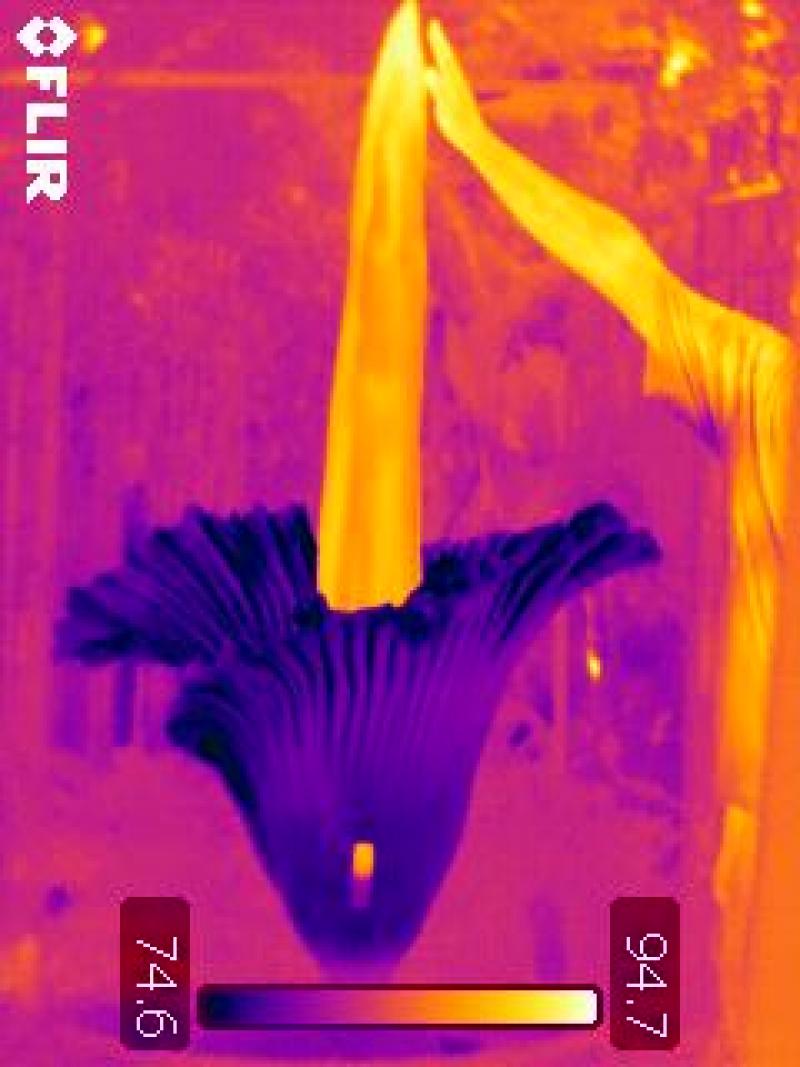 Update 4PM: Jesse is beginning to open! The edges of the spathe are pulling away from the spadix. It will take 4-6 hours for the bloom to open completely and the odor will begin to build in a couple of hours. We will be open tonight for visitors starting at 7PM until 11PM for best viewing. 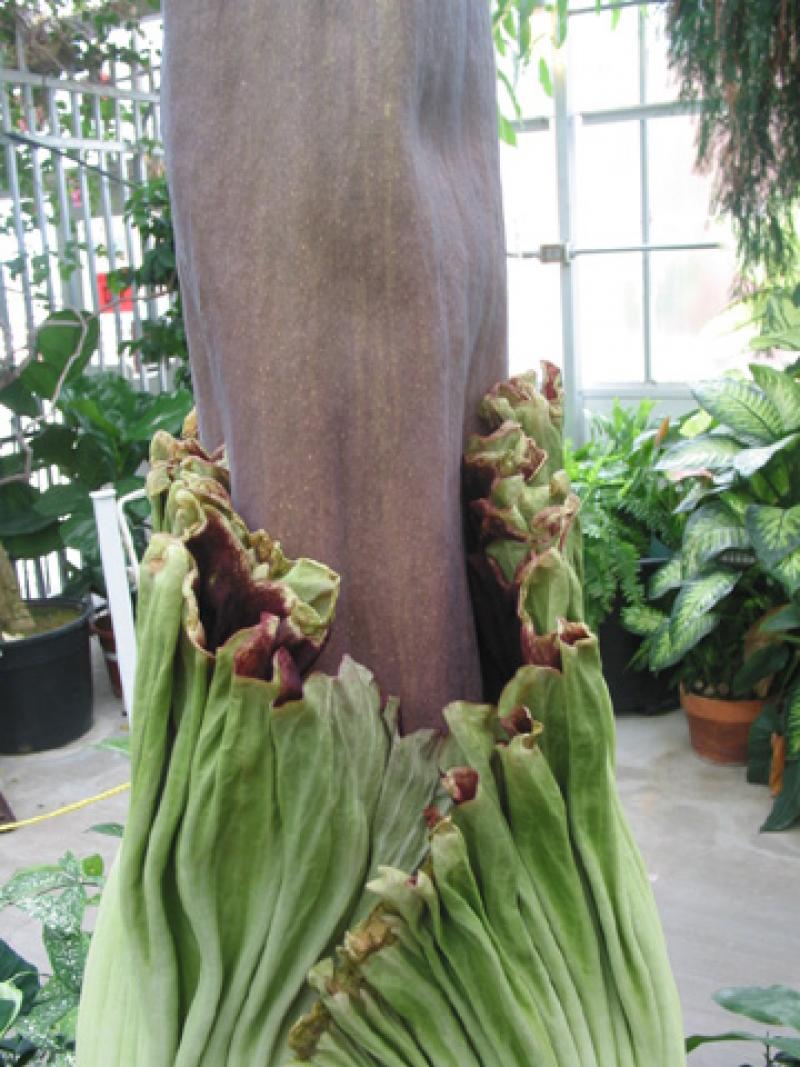 Patience is a virtue. Now all we can do is wait for Jesse to begin opening. A bit more growth since yesterday brings Jesse up to 67.5" . More dramatic however is the change in girth up 2.75" since yesterday. The image today will show why. See how the accordion-like ridges and furrows of the spathe are expanding? Stay tuned. 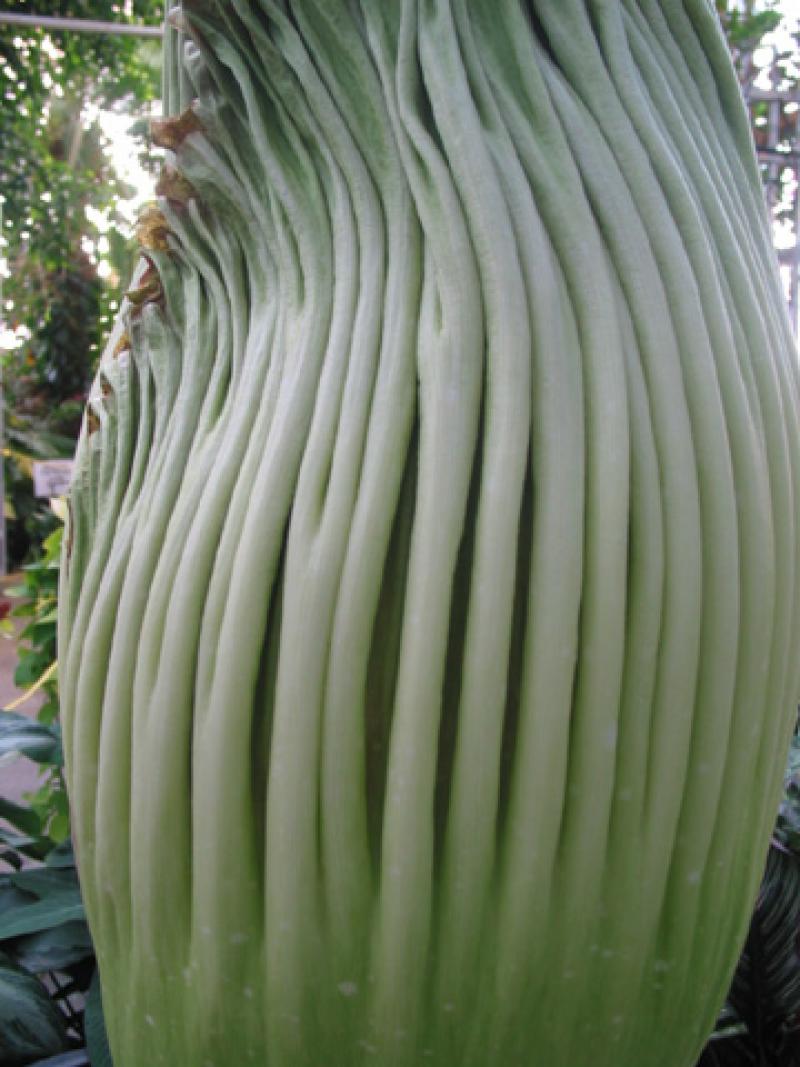 We are getting close to bloom. Jesse has gained only .75" since yesterday measuring in at 66.75" today. And just a .25" of growth around the circumference. We do see a bit of secretion at the spathe overlap running down the peduncle (see today's image). It looks white and chalky when dry. This is one of the final signals that bloom is imminent so keep checking in. We are getting lots of questions about visiting--click on the link to the right for details as they become available. We will announce special visiting hours as soon as we confirm opening of the bloom. 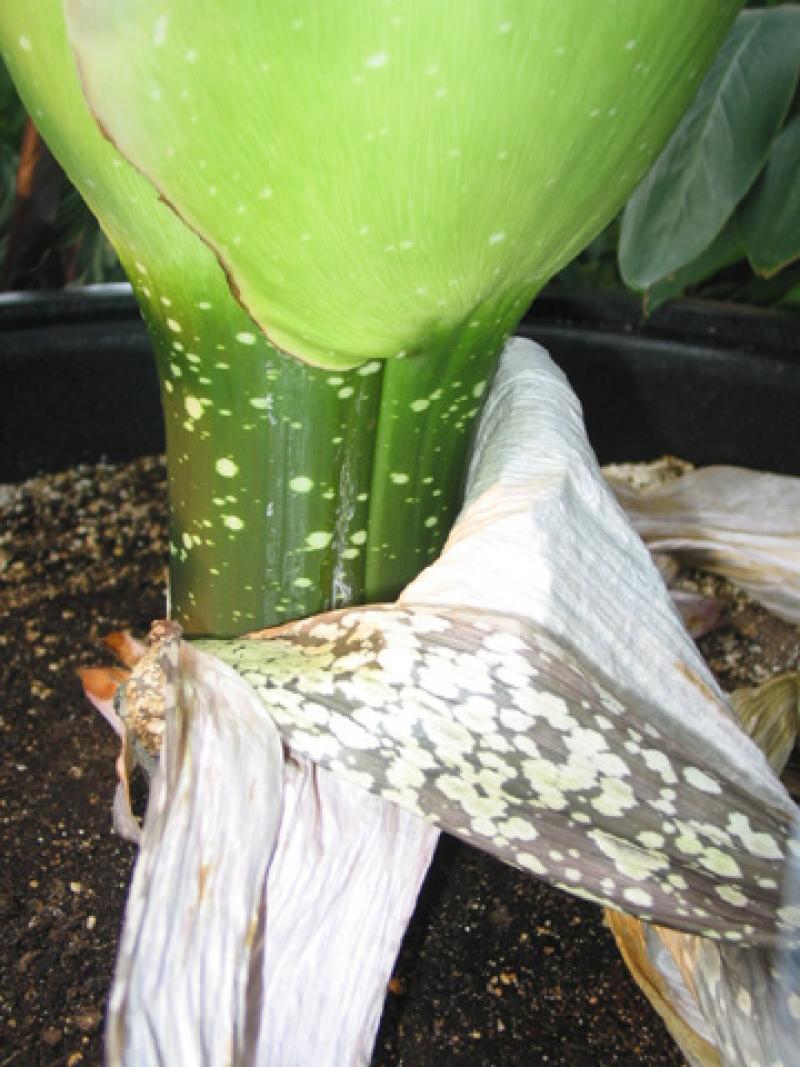 Jesse is inching along. Another 1.5" makes Jesse 66" now-.25" taller than Woody's bloom last year. Jesse is not as plump as Woody, however it did gain another 1.5" and is 37" around today. We are now detecting a slight scent but no flies have discovered it yet. Will today be the day? Keep checking back. The bloom typically opens in the evening. 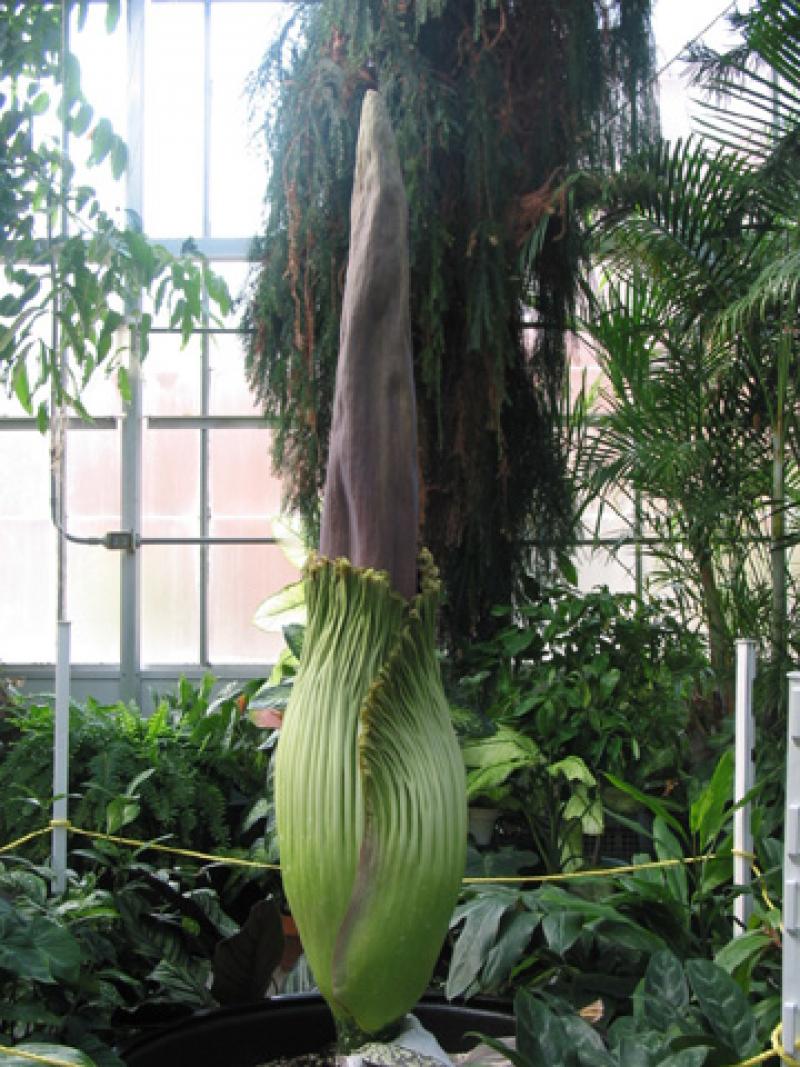 Another day of slowed growth. Just 1.25" in the past day which indicates bloom is approaching. Jesse is 64.5" now. The cataphylls have fallen completely and we are now looking for a slight malodor and maybe a few flies to begin hanging around. Jesse is still gaining girth with another 1.5" around the middle, now totaling 35.5".Today's photo stars our very own Emily Yoders-Horn to provide scale of the bloom size. 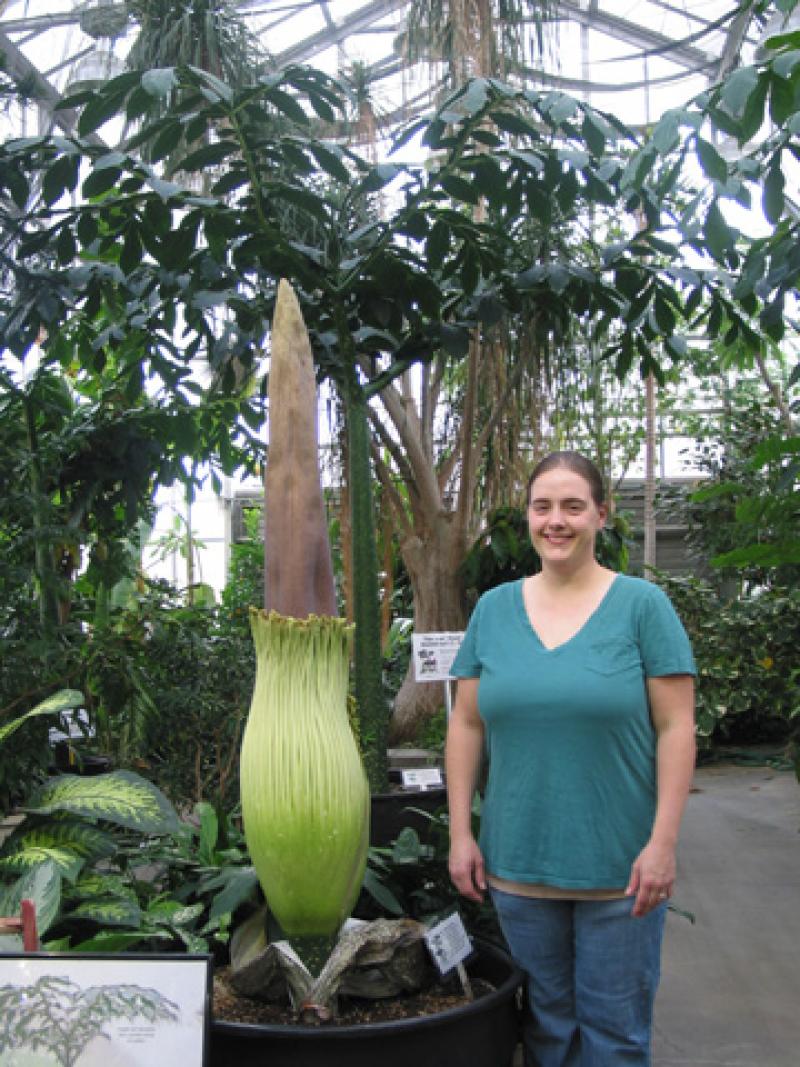 Jesse is winding down the rapid growth --only 2.25" in the last 24 hours. Measuring in at 63.25", Jesse's bloom will likely be close to Woody's 65.75" bloom. Add on another 1.5" at the middle and Jesse is up to 34" circumference. As mentioned in yesterday's update, the cataphylls (outer protective leaves) are beginning to fall as seen in today's photo. We expect Jesse's bloom to open later this week. 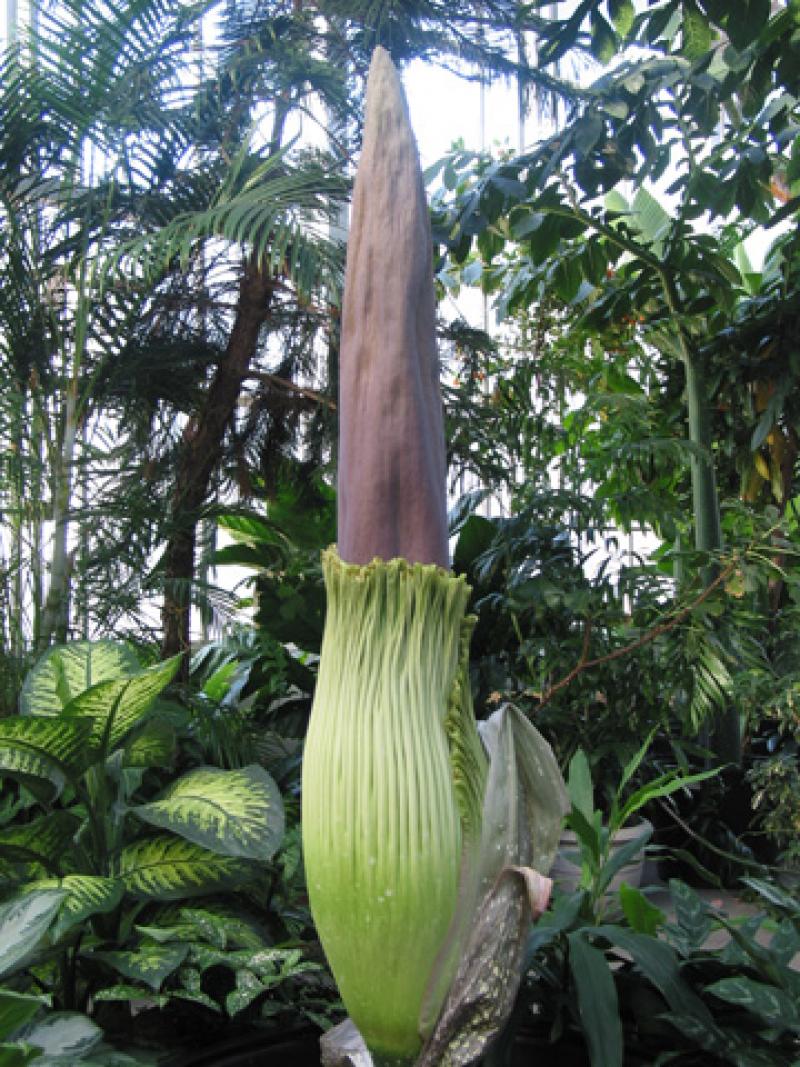 Now we are seeing a bit slower growth on Jesse which is typical as bloom time approaches. Jesse has risen over the 5' mark now measuring 61"-an addition of 3" since yesterday. We will be watching for other indicators of bloom such as the fall of the last cataphyll (outer protective leaf-like covering). 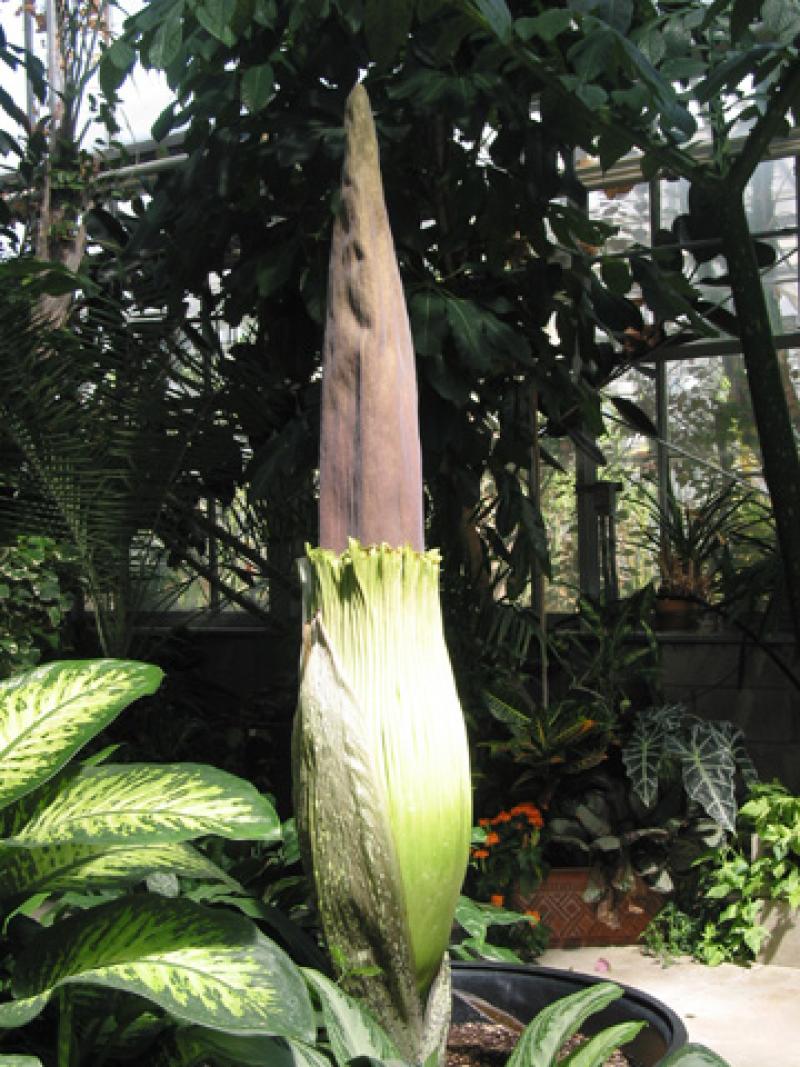 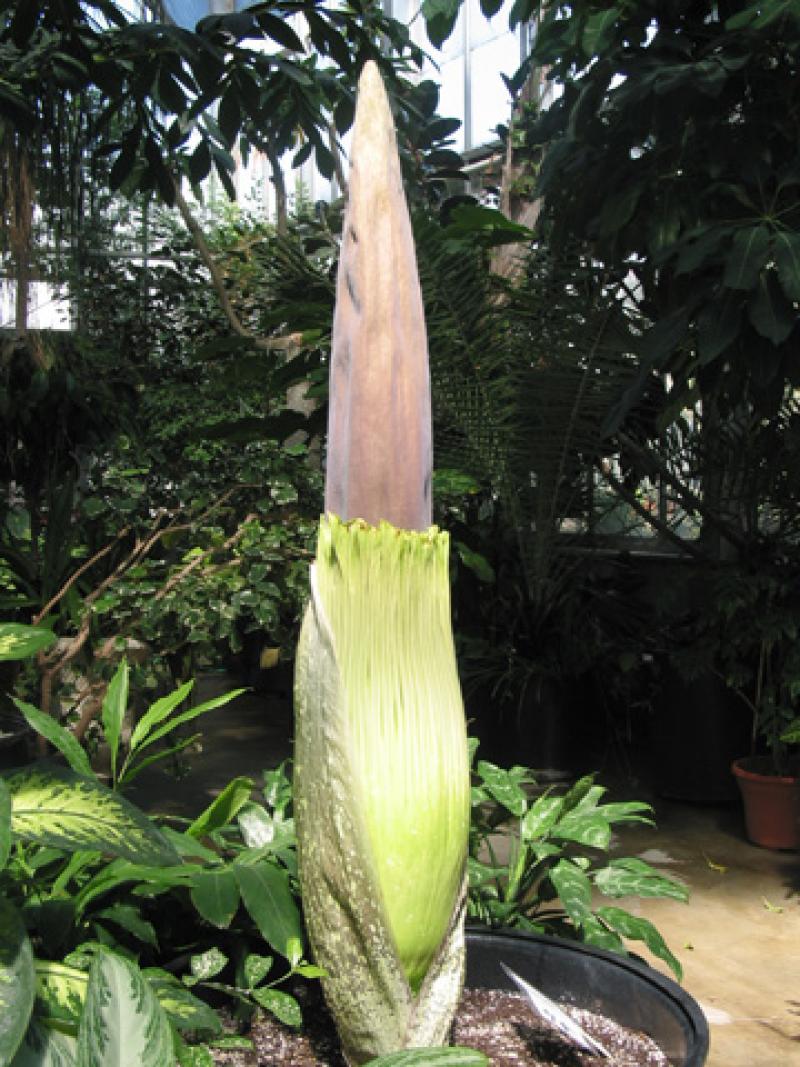 Jesse continues rapid growth adding another 4.25" in height since yesterday's measurement. This brings Jesse up to 54" now, right on target to be in the 5-6 foot range at bloom. Jesse also added 1.75" in girth, filling out to 29.25". Thanks to our Tech Services group, you can now watch Jesse on our webcam--see link to the right.(Use Firefox or Chrome browser.) 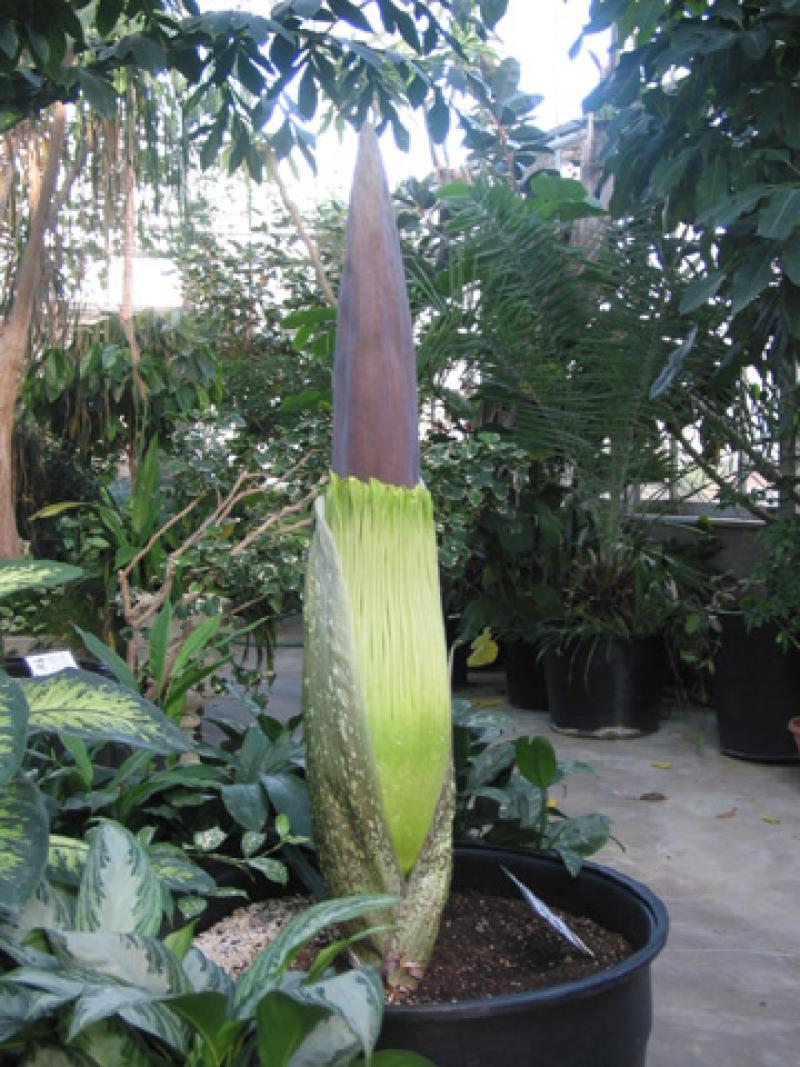 Wow! Another day of amazing growth! Jesse grew 5.25" in the past 24 hours. The bloom now reaches 49.5". Jesse is plumping up around the middle too with another 2.75" in circumference making the total of 27.5" around. 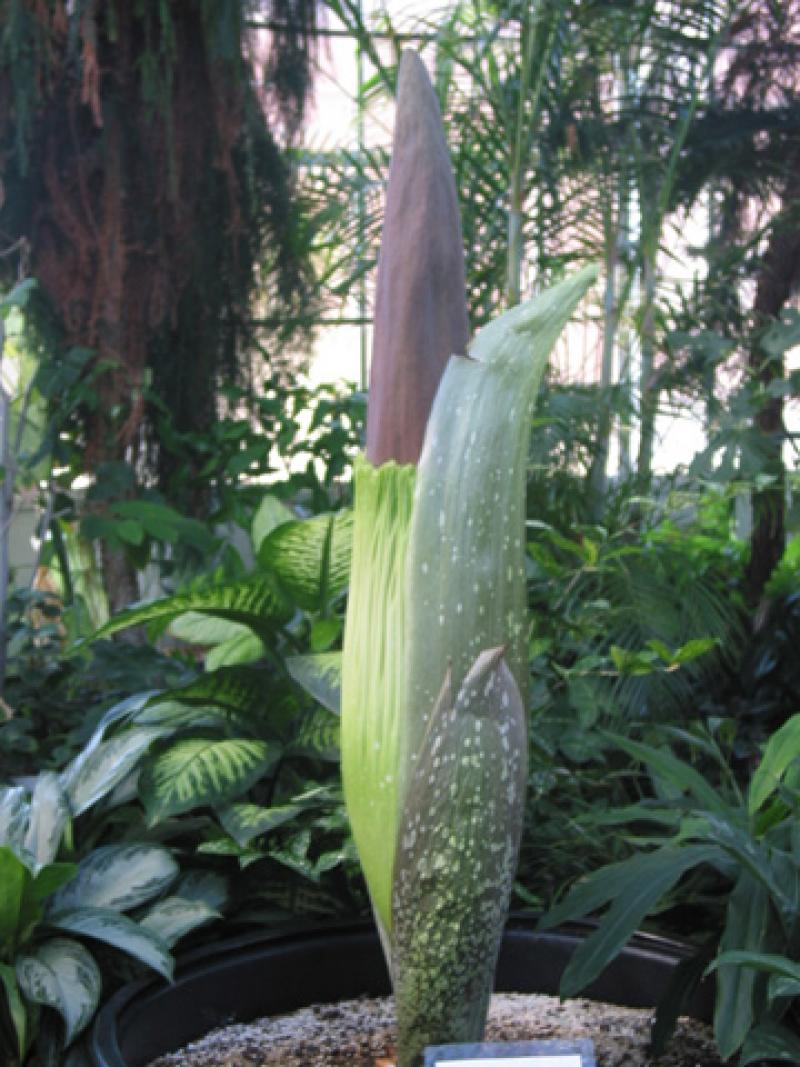 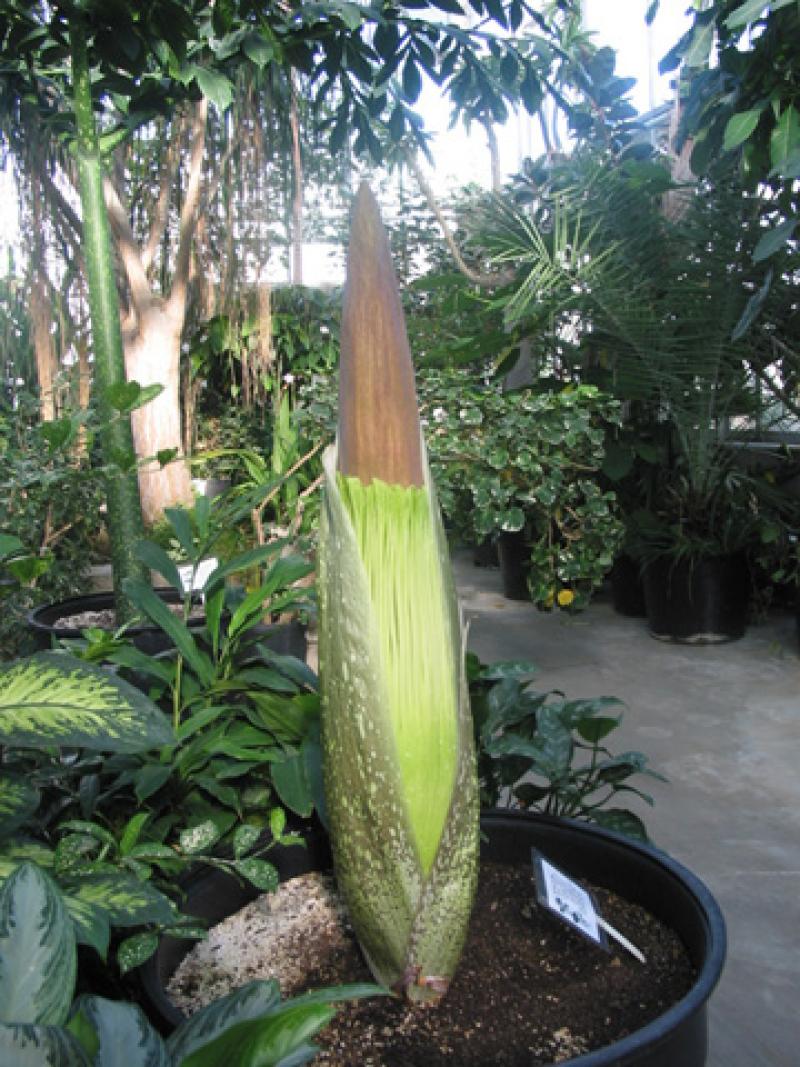 The spadix is much more exposed today so now it is easy to see the bloom emerging. Jesse gained 1 more inch in height to reach 40.5" and another 2" in girth to reach 23.5" around. 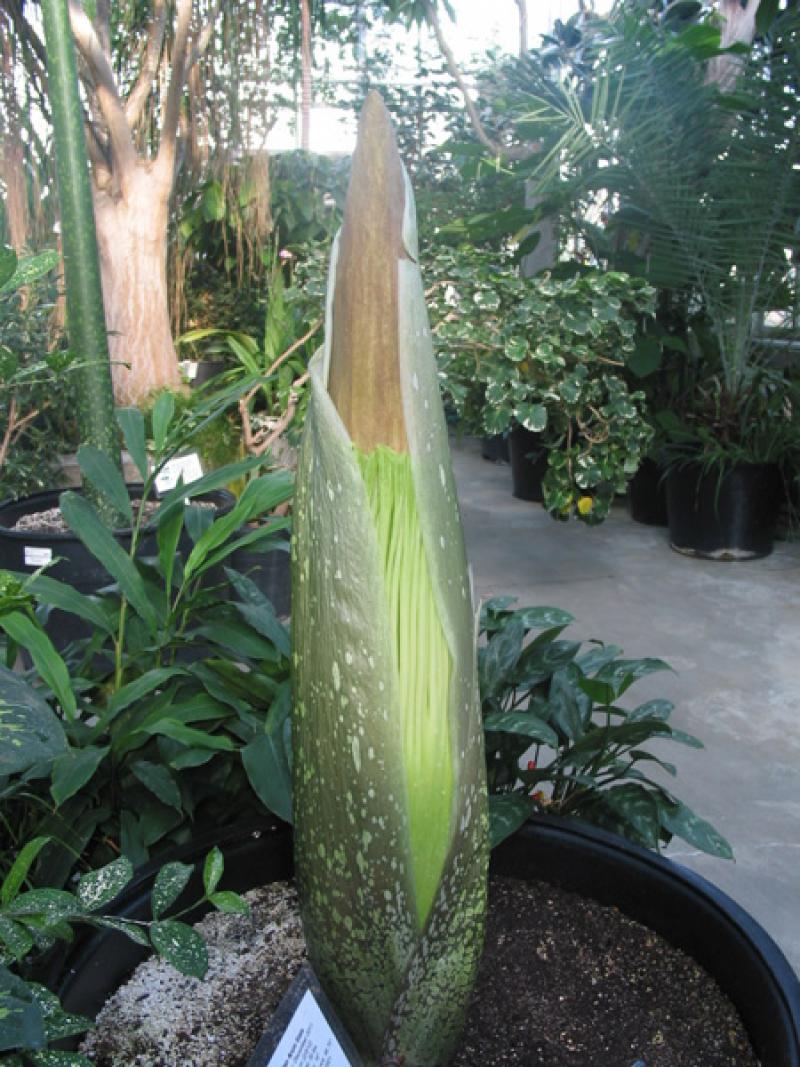 Today the bud on another of our Titan Arum specimens split open enough to reveal a bloom. We are naming this specimen Jesse after OSU and Olympic great Jesse Owens. We are anticipating bloom sometime next week so watch here for the announcement and visitation information. Today Jesse measured 39.5" high and 21.5" in circumference. 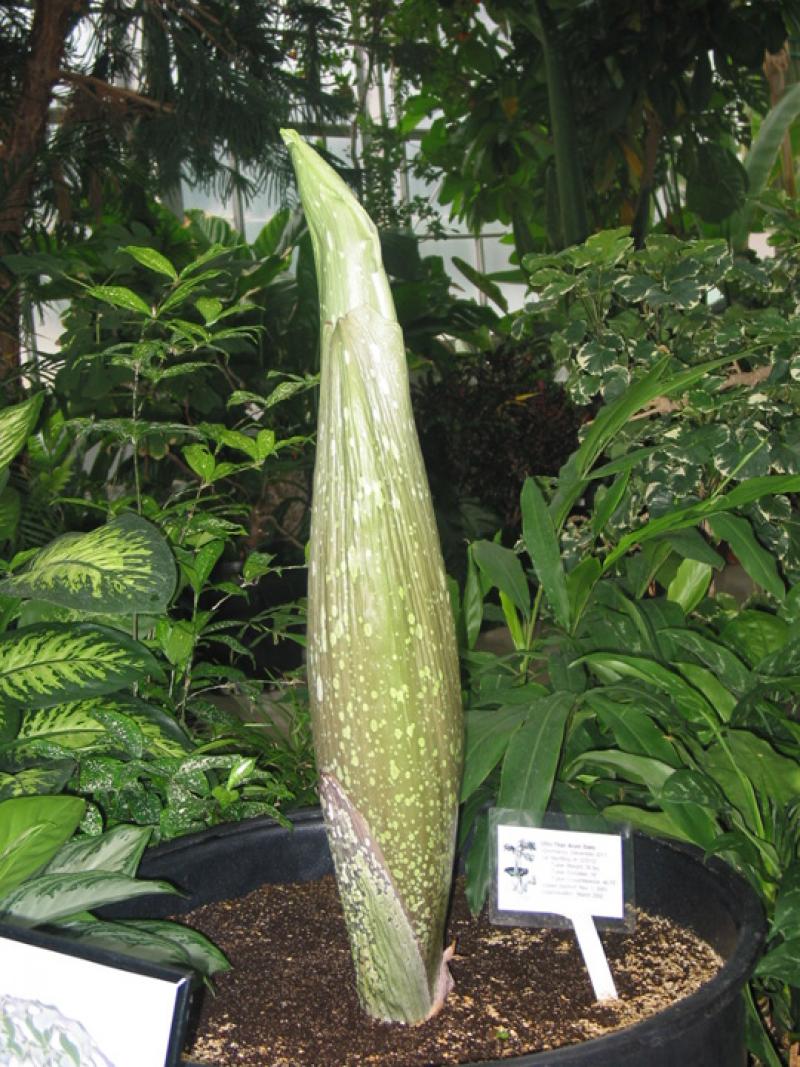 We received six Titan Arum seeds from a private collector in Hawaii. There are typically 2 seeds per fruit. The fruit is a bright reddish orange and is eaten by hornbills who disperse the seeds. 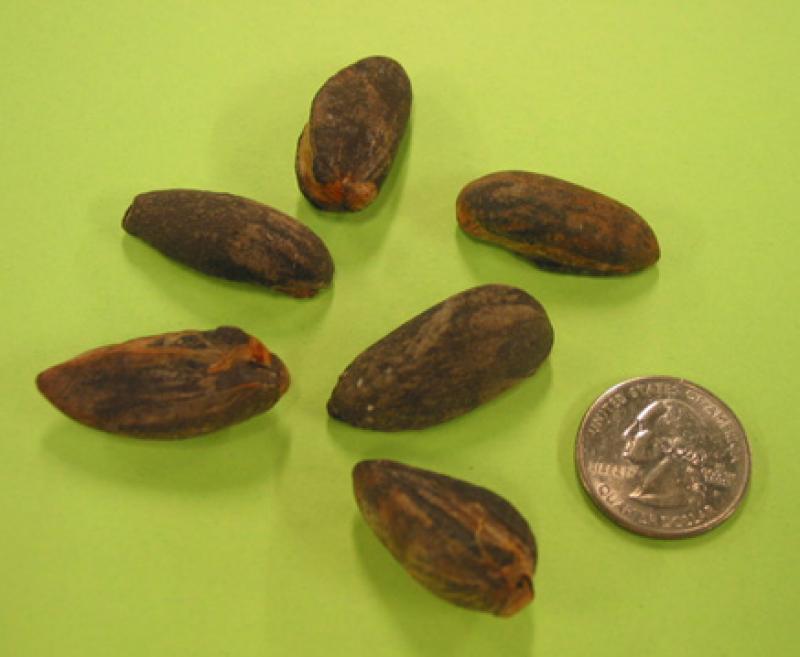 Still waiting to see if we have a bloom coming. The bud measured 31.5" today. 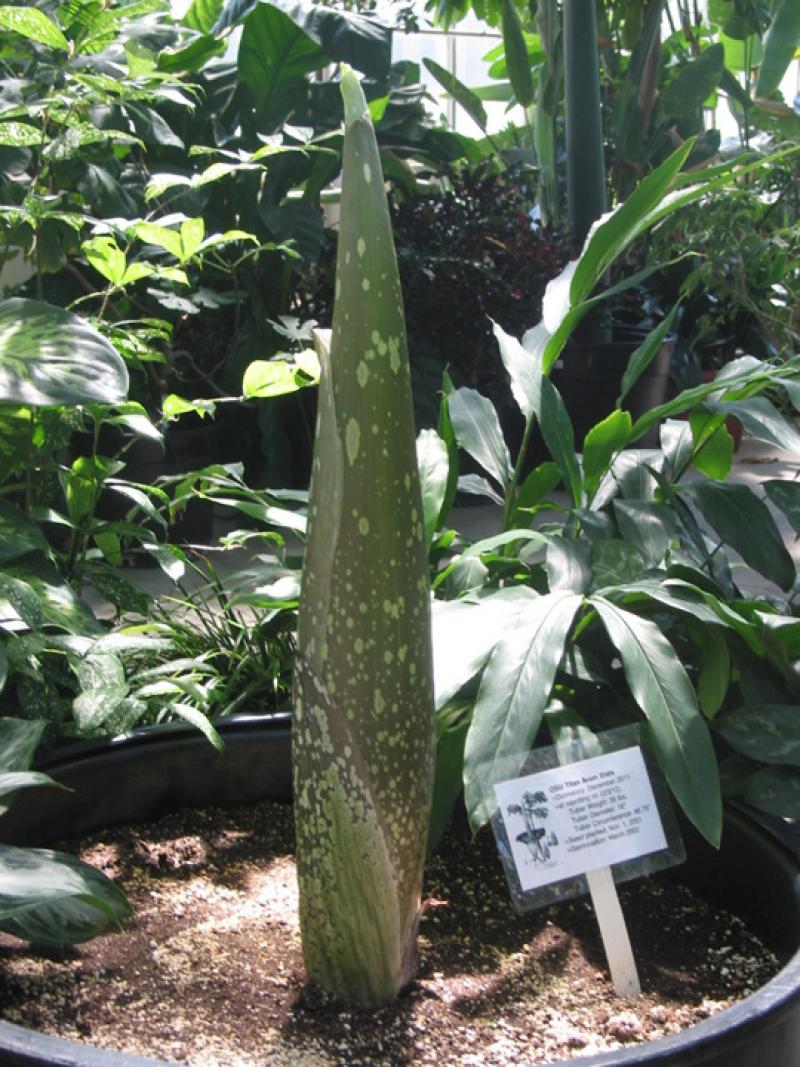